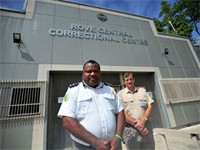 In March this year when Ian Brough, an Australian RAMSI adviser who has worked in Solomon Islands for the past four years, formally handed responsibility for the country’s largest correctional centre at Rove, to his colleague, William Aheia, the new commandant, it marked a major milestone in the long process of strengthening Correctional Services Solomon Islands which has taken place since RAMSI first arrived in 2003. For Mr Brough was the very last RAMSI adviser to hold an official Government or in-line position in Corrections.

During the worst of period of civil and social unrest now known as The Tensions, Solomon Islanders were not able to count on the rule of law to protect them, courts were sitting but the police could not or in some cases would not enforce their rulings and the prisons, especially Rove had ceased to function. Prisoners were left to fend for themselves with many quietly returning to their villages and prison officers, who were rarely being paid, no longer reported for duty.

As RAMSI’s Participating Police Force officers, with the assistance of some local police, began to enforce the rule of law, there was an urgent need for prisons. RAMSI had to move quickly to restore the basic functions of the prison system, so RAMSI personnel were brought in to help fill almost all positions – from the Commissioner and Commandants down – and to reinstate what little correctional infrastructure remained. These initial responses were successful, and attention soon turned to the task of rebuilding the service into an organisation built on a strong vision, long-term strategic thinking and respect for staff and prisoners alike.

“Back in 2006, when I started in Solomon Islands, the Prison Service had a very heavy focus on security,” said Mr Brough in an interview this week. “It was in the very early stages of heading towards focussing more on rehabilitation, which has been an ongoing process of change over the past four or five years.”

This changed approach to the treatment of prisoners, from ‘prison as punishment’ approach to one where the focus is on rehabilitation, has brought great benefits to Solomon Islands.

“The majority of prisoners will, eventually, be released back into the community,” he explained. “The correctional system has a responsibility to prepare each prisoner for this by addressing the issues that put them into the prison in the first place, and providing them with skills to better serve their community, so that they don’t return to the same behaviour.”

He believes that the Correctional officers – who work with prisoners on a daily basis – are now seeing the benefits of the new approach to working with prisoners.

“Correctional Officers now see a rehabilitative role in what they do now, which has been a big change,” Mr Brough said. “Most officers used to see their job as primarily locking up prisoners, whereas they now see it as ‘locking up prisoners and making them better people’.”

This is not, however, the only change Mr Brough has seen in his time in Solomon Islands. The organisation which underwent a name change in 2006: the Solomon Islands Prison Service became Correctional Service Solomon Islands and is now heavily focussed on improving the way it manages prisoners, and also on improving the way each of the country’s five correctional centres operate. The new systems being put in place will help make sure that every process within the prison, such as the checking of gates to prisoner musters, are cross-checked against a rigorous process each and every time they occur, making sure they are being carried out properly.

Central to these changes has been Mr Brough’s relationship with his counterpart, the newly-sworn-in Commandant of Rove, William Aheia. Mr Brough believes the key component to their successful partnership has been in their ability to recognise each other’s strengths.

“Our relationship has not been one where I would lead and William would follow; far from it. We would jointly share all the duties and responsibilities, and William would look after particular areas, and I would do others.”

“William would do a lot of the operational work, and I would start to do some of the planning, but we’d share and discuss it. And now, William leads on all of it.”

Mr Brough believes the idea that an international adviser can simply come in and ‘show someone the ropes’ is simplistic, and not reflective of the complexities of building capacity.

“I relied as much on William as he did on me. Particularly for the things that involve cultural, historical or operational elements – and these are constant in this job – William has a really good background. I don’t know the history of Rove, and I don’t know why a particular process or policy was put in place in the past. And it is important to recognise and discuss these elements together.”

Mr Aheia, who is now in charge of the largest correctional centre in the country, believes while he has learnt much from his time working alongside his RAMSI colleague, the most important skills he has gained from his time alongside Mr Brough are improved skills in management, and the ability to think ahead.

“When we came together I respected Ian, because he knew a lot about the direction of the organisation and the direction we were all trying to get to. He understood what we wanted, and what we are trying to put in place.”

“And I am now, after two years working with Ian, a lot more focussed on setting goals, and forward-thinking. Rather than just looking at the daily routine, I know I think a lot more strategically.”

Mr Brough is very confident in Mr Aheia and his team. However he stresses the process of ‘handing over’ does not simply involve shaking hands, finishing up, and walking away. He expects to remain in Solomon Islands providing advice to William, in the short-term.

“William is Commandant now, but he doesn’t make the key decisions in isolation, he continues to use the Management Team – it’s a strong consultative approach,” he said. “It’s about sharing the responsibility.”