Solomon Islands is an archipelagic state situated in the south-west Pacific Ocean. The country is located to the east of Papua New Guinea, the north-west of Vanuatu and approximately 2,000 km to the north-east of Australia. Its land mass of 28,400 km² extends over nearly 1000 islands comprising nine main island groups. The capital, Honiara, is located on Guadalcanal, the largest island.

The population of Solomon Islands, estimated to be about 580,000, is predominantly Melanesian (about 95%) although there are also small Polynesian, Micronesian, Chinese and European communities. There are 63 distinct languages in the country, with numerous local dialects. English is the official language but Solomons Pijin is the lingua franca for the majority of people. 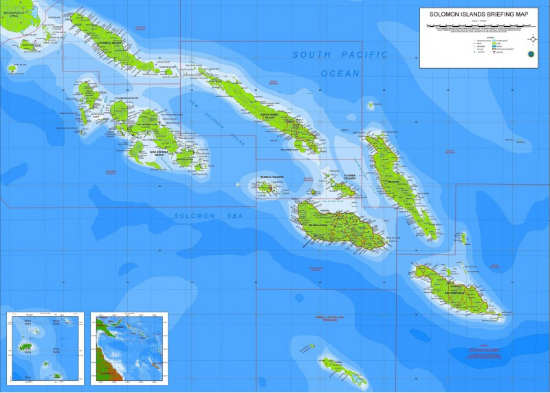 Solomon Islands has been inhabited for thousands of years. In 1568, the Spanish navigator Álvaro de Mendaña was the first European to visit them, naming them the Islas Salomón.

In 1893, the UK Government established a protectorate over the eastern group of islands; Germany controlling most of the west. As the result of an Anglo-German agreement of 1899, the UK protectorate was extended to all nine main island groups now part of Solomon Islands, while Buka and Bougainville became part of German New Guinea (later incorporated into Papua New Guinea).

The Solomon Islands was the site of major campaign of the Pacific War of World War II. The campaign began with Japanese landings and occupation of several areas in the British Solomon Islands, during the first six months of 1942. The Japanese occupied these locations and began the construction of several naval and air bases with the goals of protecting the flank of the Japanese offensive in New Guinea and providing bases for disrupting supply lines between the Allied powers of the United States and Australia and New Zealand.

The Allies, in order to defend their communication and supply lines in the South Pacific, supported a counteroffensive in New Guinea, and counterattacked the Japanese in Solomon Islands with landings on Guadalcanal and small neighboring islands on 7 August 1942. These landings initiated a series of combined-arms battles, beginning with the Guadalcanal landing and continuing with several battles in the central and northern Solomon Islands, and on and around New Georgia Island.

In a campaign of attrition fought on land, on sea, and in the air, the Allies wore the Japanese down, inflicting losses on Japanese military assets. The Allies retook some of the Solomon Islands, although resistance continued until the end of the war, and they also isolated and neutralized other Japanese positions, which were then bypassed.

Local councils were established in the 1950s as the islands stabilised from the aftermath of the Second World War. A new constitution was established in 1970 and elections were held, although the constitution was contested and a new one was created in 1974. In 1973 the first oil price shock occurred, and the increased cost of running a colony became apparent to British administrators.

Following the independence of neighbouring Papua New Guinea from Australia in 1975, the Solomon Islands gained self-government in 1976. Independence was granted on 7 July 1978. The first Prime Minister was Sir Peter Kenilorea, and Solomon Islands retained the Monarchy.

The Tensions were a period of civil unrest in Solomon Islands mainly characterised by fighting between different ethnic militant groups. In December 1998, existing ethnic tensions on Guadalcanal rapidly escalated. The Solomon Islands Government struggled to respond to the complexities of this evolving conflict. There were also a number of attempts at reconciliation but to no avail and by late 1999, the government had declared a state of emergency.

Solomon Islands is a constitutional monarchy and has a parliamentary system of government. Queen Elizabeth II is the Monarch of the Solomon Islands and the head of state; she is represented by the Governor-General who is chosen by the Parliament for a five-year term.

There is a unicameral parliament of 50 members, elected for four-year terms. However, Parliament may be dissolved by majority vote of its members before the completion of its term.

In addition to the national Government there are nine provincial assemblies, each led by a Premier. The nine provinces are:

Honiara is governed separately on the local level by the Honiara Town Council.

Solomons Pijin is the national language of Solomon Islands. Closely related to Tok Pisin in Papua New Guinea and Bislama in Vanuatu, it is used throughout the country’s nine provinces.

In order to provide RAMSI staff, and the wider community, with a useful guide to using Pijin, RAMSI has produced Tok Pijin: A Quick Guide to Speaking Pijin. It is focused on everyday words and phrases, and includes a section on cultural and social etiquette.