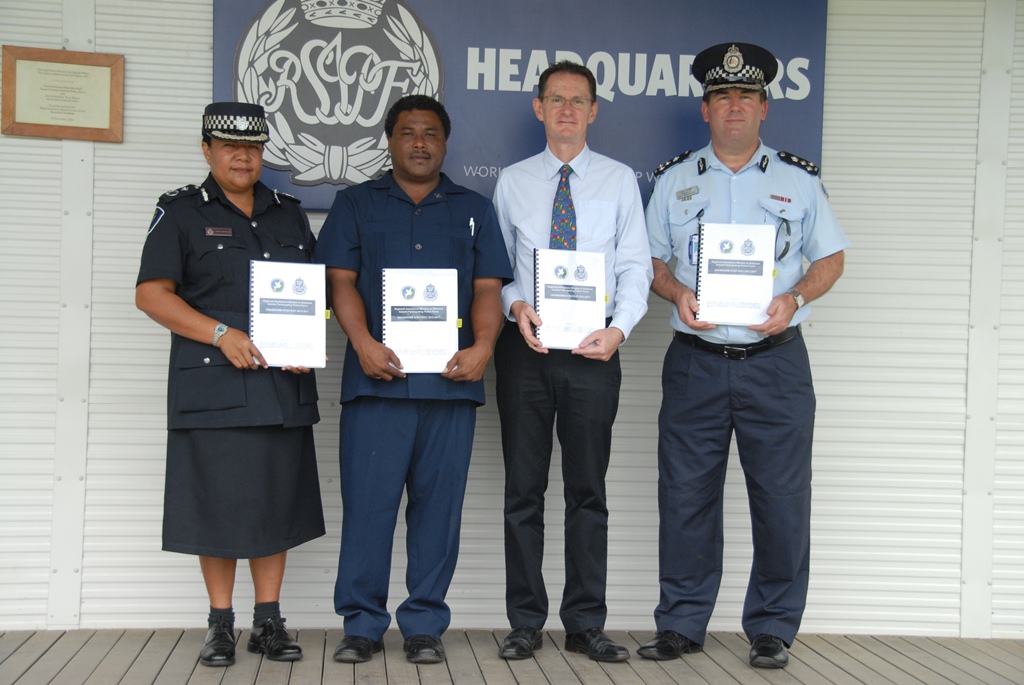 The Strategy provides a further four years of planned capacity development assistance for the RSIPF; it involves ongoing PPF training and equipment support that aims to develop the Royal Solomon Islands Police Force (RSIPF) into a highly effective, modern and professional police force.

The Solomon Islands Government Cabinet has deliberated on the RAMSI Drawdown Strategy 2013-2017 and endorsed the Strategy as the framework governing the delivery of a flexible and comprehensive assistance package.

At the signing ceremony, Minister Laore praised the Strategy commenting’ “I thank RAMSI and the PPF for their ongoing support to the RSIPF and would like to announce that the RAMSI Drawdown Strategy 2013-2017 has been endorsed with the full support of the Cabinet.”

“The signing of this new 4 year strategy demonstrates just how strong and effective the partnership between the Solomon Islands Government and RAMSI has become over the last ten years. That partnership will become increasingly important in the future as RAMSI continues with its gradual drawdown, and the PPF transfers its security obligations and responsibilities to the RSIPF. The cabinet endorsement and support for the strategy is a significant and positive outcome for the RSIPF. We are very confident that the RSIPF with PPF support will continue to refine and develop its goal of delivering an independent and professional level of policing service delivery to the communities of this country. I would like to personally thank the Solomon Islands Government for its ongoing support and commitment to this process.”

The Drawdown Strategy outlines the continued transition and eventual drawdown of the PPF’s security obligations under the RAMSI Mandate. The Drawdown Strategy will be used to guide the PPF, Solomon Islands Government (SIG) and RSIPF in focusing its programming and support of the RSIPF to achieve the goal of returning full security obligations and responsibilities to the RSIPF by June 2017.

The Drawdown Strategy 2013-2017 identifies the need for the PPF to focus on indigenous capacity development. It is envisaged that by mid-2017 the RSIPF will be able to:

The RSIPF Acting Commissioner Juanita Matanga acknowledged the PPF for their support and during 2011-2013.

“I would like to thank the Special Coordinator, Commander Osborne and the men and women of the PPF and RSIPF for their unwavering support and commitment. It has been a great success story for us.The RSIPF has truly developed into a far more independent Police Force and we look forward to building upon that success over the next four years.”

The Drawdown Strategy 2013-2017 takes a thematic approach towards Capacity Development in which the PPF will work in partnership with the RSIPF to continue increasing capability in the following areas:

Funding for the Drawdown Strategy has been provided by the Commonwealth Government of Australia which has committed $315.6m for the period 2013-2017.

Participating Police Force (PPF) Commander Paul Osborne stated: “The RSIPF and the PPF have developed a very strong close and professional working relationship which has been built upon many years of hard work by police officers past and present. The secret of that success has been the RAMSI model, police men and women from the RSIPF and all of the Pacific Islands Forum countries who make up the PPF have worked together to achieve a common goal and purpose.”

Commander Osborne also commented: “During the last two years we have seen the RSIPF take some great steps forward regarding its professional development. The manner in which it protected the community and the many visitors who came to the Solomon Islands during 2012 to participate in major events such as the Festival of Pacific Arts and the Royal visit has demonstrated just how far the RSIPF have developed in recent years. They now have much better training, new and more modern police stations, more cars, boats and specialist equipment which is now allowing them to take on the vast majority of policing responsibilities in this country.”

One of the key successes has been the introduction of capsicum spray for general duties police and the expansion and development of the Police Response Team including Government approval to train and equip the PRT with less lethal munitions and specialist riot equipment.

Minister Laore announced that when considering the Drawdown Strategy, Cabinet also approved a concept paper for the limited reintroduction of firearms into the RSIPF. The limited reintroduction of firearms will be completed in two separate stages; each stage requires separate approval before the Government will allow the RSIPF to carry firearms in the future.

The first stage recently approved by Cabinet has authorised the RSIPF and PPF to work together on the following activities:

• Build infrastructure including armories and training facilities
• Develop necessary policies and regulations governing the carriage and use of firearms
• Train a carefully selected number of RSIPF officers in the use of a limited number and type of firearms.

Minister Laore added that “in providing the authorization to start the first stage of training, Cabinet has specifically stated that it has not yet provided the RSIPF with final approval to carry and use firearms. That decision will require a further separate approval by Cabinet that will be made at a later date.”

Commenting about the need for community consultations, Minister Laore stated: “We fully acknowledge and respect that a careful and long consultation process will need to be undertaken between officials and communities across the Solomon Islands. It is very important that everyone is given the correct information about this project. That will give us the confidence to move forward together and decide when the time is right for our police force to carry firearms again.”

Acting Commissioner Matanga explained that “only a small number of RSIPF officers will be trained in the use of firearms. Only specialist areas within the RSIPF will receive firearms training. They are close personal protection teams who protect the Prime Minister, Governor General and visiting foreign dignitaries; police who provide security and protection at Honiara International Airport; and the Police Response Team. This means the RSIPF will only need to seek approval for obtaining a small number of firearms and they will be tightly monitored and controlled using a very stringent set of policies and guidelines”.

PPF Commander Osborne further added: “The firearms training and infrastructure we will provide for the RSIPF will be of a very high standard. The PPF will work alongside the RSIPF over the next four years to monitor its implementation; we are committed to delivering the highest standards of training, safety and security for this program.”