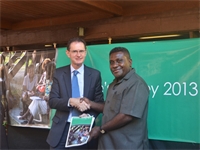 The Solomon Islands Prime Minister, Gordon Darcy Lilo has highlighted the need for access to very basic information and education when launching the People’s Survey 2013 in Honiara on 26 June 2013.

Prime Minister Lilo said that after looking at the results of the People’s Survey he noted some important findings.

“The most fundamental is the absence of good quality information in the community. For example, on the findings on taxation, only 8% of the respondents knew the taxation threshold has moved from $7,800 to $15,000. 82% did not know anything about the threshold at all,” said Prime Minister Lilo

He also pointed out that in the survey report, although 86% supported RAMSI, 66% did not know who funds RAMSI. In terms of access to agriculture information, 47% of the respondents said they did not have any access at all.

“These statistics point to the important need for access to very basic information and education,” said Prime Minister Lilo.

He reaffirmed the Government’s commitment to using the People’s Survey to realign its priorities.

The 2013 People’s Survey, the sixth since the pilot survey in 2006, documents the opinions of nearly 3,400 people from communities on Guadalcanal, Malaita and Western Provinces as well as in Honiara on areas including access to public services, access to household services, safety, leadership, accountability and the resolution of disputes.

The Survey was independently conducted by the ANU edge, the commercial arm of the Australian National University in collaboration with the University of the South Pacific in Suva, Fiji.

Special Coordinator of the Regional Assistance Mission to Solomon Islands, Nicholas Coppel highlighted that 91 % of respondents in the Survey said the main cause of conflict and problems in their communities was alcohol, drugs and kwaso.

“Today, alcohol is the number one underlying cause of problems in families and communities,” said Mr Coppel.

RAMSI’s Special Coordinator said that from the findings of the Survey, more work needs to be done to improve and strengthen the Royal Solomon Islands Police Force.

“That is why it has been decided to keep RAMSI’s Participating Police Force in Solomon Islands for four more years until 2017,” said Mr Coppel.

He said it is gratifying to learn from the Survey of the continuing support for RAMSI which is the result of hard work and continuous support from the Solomon Islands Government and the Mission’s participating countries.