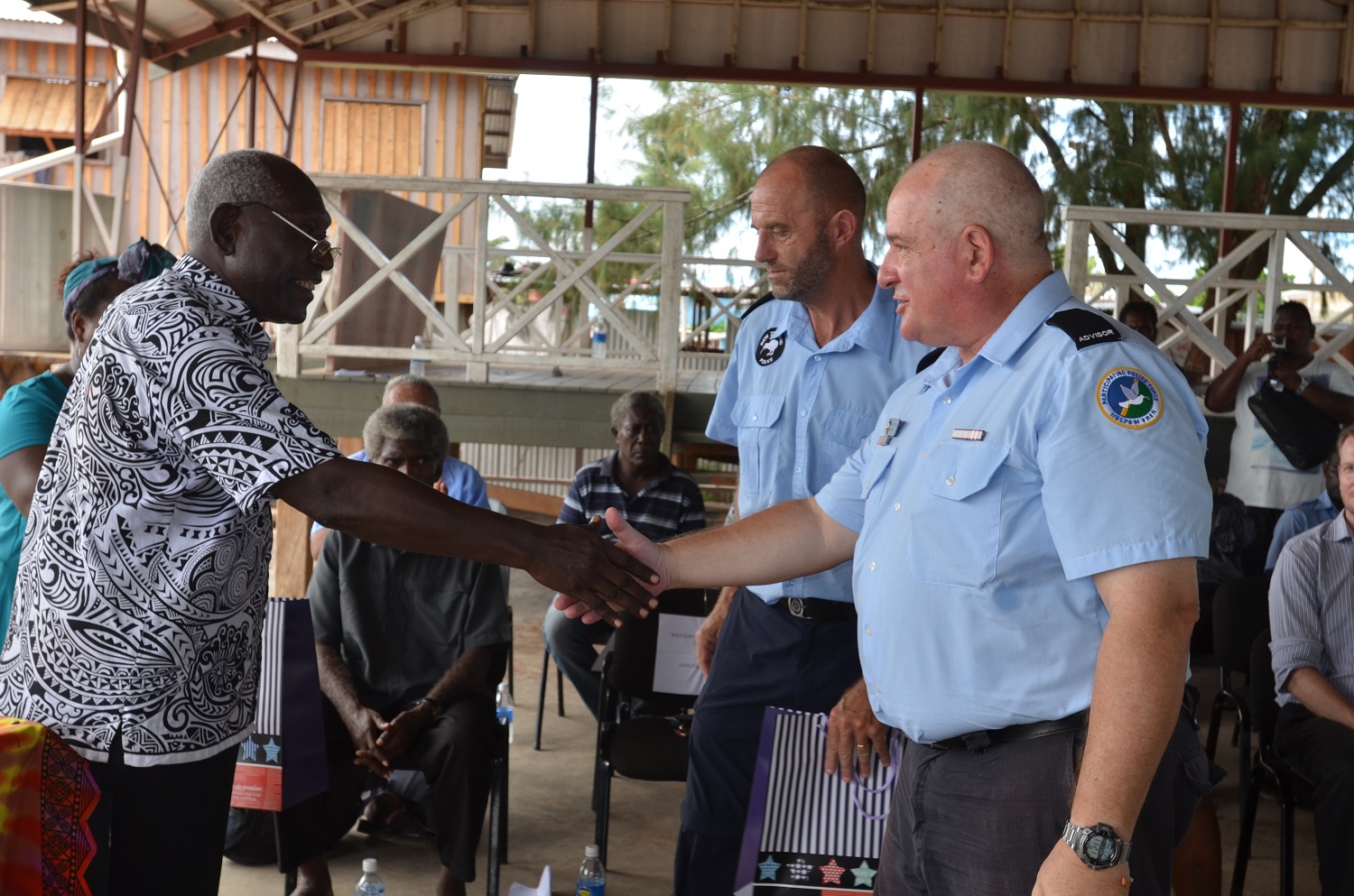 The people of the Western Province and their provincial government have officially farewelled the last two provincial-based Regional Assistance Mission to Solomon Islands (RAMSI) advisers to the Royal Solomon Islands Police Force (RSIPF).

The departure of the Gizo-based RAMSI Participating Police Force (PPF) advisers is a major milestone in the drawdown of the RAMSI as they were the final two PPF officers that were based permanently outside Honiara. From 12 May, RAMSI will support policing in the Western Province from Honiara, as it does to other provincial police posts.

The withdrawal marks the final phase of the PPF drawdown from the provinces and is another important step towards handing over the final elements of responsibility for law and order to RSIPF when RAMSI concludes its mission in June 2017 as agreed by the SIG and RAMSI in 2013.

The two advisers were farewelled during a ceremony held at the provincial capital Gizo on 12 May 2016 and attended by senior representatives of the Solomon Islands Government (SIG), the Western Provincial Government, the RSIPF and RAMSI.

Speaking on behalf of the Western Provincial Government, the Supervising Premier, Hon. Isaac Vula Tatapu acknowledged all the tremendous assistance that RAMSI had rendered to the country as a whole, and specifically to the Western Province, since its arrival in 2003.

“Western Province has enjoyed a warm and beneficial working relationship with all members of the PPF. They have served diligently and exemplified professionalism through ‘thick and thin’. Western Province is thankful that the standards set and training imparted by RAMSI to the RSIPF rank and file have produced better and smarter officers,” said Supervising Western Premier, Hon. Tatapu.

He stated: “We are confident our RSIPF can stand up on its own two feet and carry on the task of policing into the foreseeable future.”

Despite the departure of the PPF from the Western Province, Hon. Tatapu said, “the province is assured the withdrawal of the two PPF officers from Gizo, and subsequently RAMSI’s withdrawal from Solomon Islands in 2017, will not stop the Western Province from continuing to build on the gains achieved under RAMSI’s guidance.”

Speaking on behalf of the National Government, the Special Secretary to RAMSI, Mr John Wasi thanked RAMSI and successive PPF Commanders for their “tireless work in supporting the work of the RSIPF here in the Western Province.”

Mr Wasi also thanked the Western Provincial Government, chiefs and elders, communities, the churches, youths and the people of Western province for supporting the work of RAMSI in the province.

“The withdrawal of RAMSI from Gizo is a positive thing for all of us. We must move on and build on the achievements we have had in this partnership. This nation and province belongs to us, not RAMSI. This nation belongs to the future generations of this nation and province. We must take the responsibility in our own hands. We must continue to support the work of the RSIPF in the Western Province. We must help the chiefs and elders of our communities to look after our children,” said Mr Wasi.

Also thanking RAMSI, RSIPF Commissioner Frank Prendergast said the drawdown is a sign that the RSIPF in Gizo are ready, willing and able to provide all the policing services in Western Province.

He also highlighted that a second Stabicraft police boat and a new Striker Fire Truck would be delivered by RAMSI to Gizo very shortly.

“The RSIPF is now a very different organisation to that of a decade ago. It is well equipped, has better infrastructure than most Pacific police forces, is very well trained, and it has decent staffing and budget levels,” said Mr Prendergast.

“I appeal to the provincial governments, churches, communities, schools, men and women, youths and other stakeholders to support the RSIPF by supporting the recently endorsed Crime Prevention Strategy which will see more community engagement and collaboration with stakeholders to prevent crime before it occurs,” said Commissioner Prendergast.

Speaking on behalf of the RAMSI PPF Commander, Coordinator of Provincial Policing, Superintendent Trevor Pullen explained at the farewell ceremony that as a result of PPF support, the RSIPF is able and willing to provide all the policing services in Western Province.

“However, I can assure you that although the physical PPF presence is withdrawing from Gizo, support will still remain for the RSIPF through our provincial mentoring programme. This will involve regular visits from PPF officers working in capacity development roles to ensure the RSIPF continues to develop into a professional police force. Additionally, Australia and New Zealand have also indicated they will both continue to support the RSIPF through bilateral programs post-RAMSI,” he said.

Superintendent Pullen thanked the past and current Premiers and governments of Western Province, the communities and people of the province for their friendship and the hospitality that they have shown to all the members of the PPF who have served in the province since 2003.

RAMSI Special Coordinator Quinton Devlin agreed that the withdrawal of PPF officers reflected the enormous progress made since RAMSI’s arrival. He pointed to the bustling Gizo township as an example.

“The benefits of the law and order maintained by the RSIPF in Gizo are clearly visible – there is a new provincial headquarter building, a new provincial hospital, a new tourism and information centre is being constructed; cruise ships now grace Gizo’s shoreline and farmers, fishermen and vendors are flooding the Gizo market to sell their produce and catch,” he said.

Soon after its arrival in Solomon Islands in 2003, RAMSI established a presence in 15 provincial locations, including in Gizo, Munda and Lofung to help restore law and order and support RSIPF posts at Munda, Noro, Ringgi, Poitete, Seghe, Kulitanai Bay and Gizo. RAMSI withdrew from 13 locations in 2013 and Auki in 2015.